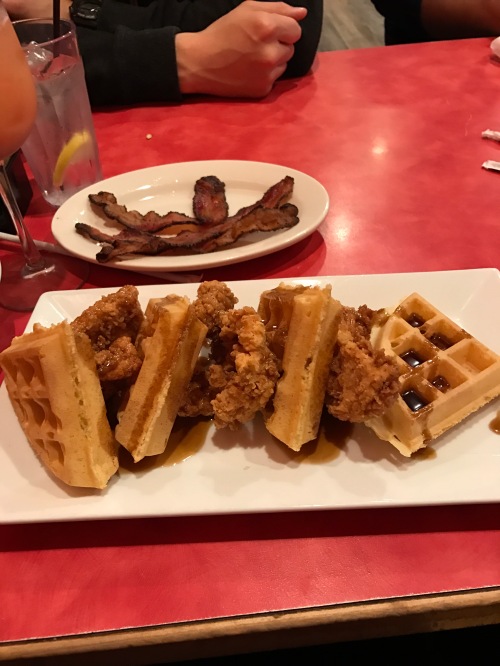 I’m not a fan of breakfast food but recently I went to a little Restaurant called The Egg Bistro.

Okay, I’ve actually been there two times this week. That’s just how good the food was.

The first time I ordered two pancakes, thick cut peppered bacon and some country ham. No one told me that the pancakes were massive. I barely made it halfway through my plate before I was full. The pancakes were amazing. My only complaint is that they don’t warm the syrup. However, I’m sure if I wouldn’t have been so busy stuffing my face I probably could have asked.

Today, I was sitting next to a table and the lady sitting there ordered the chicken and waffles. Now, I wanted the pancakes  bad and had been thinking about them everyday this week but as soon as I saw that beautiful display of food, I immediately changed my mind on the pancakes and decided to try something different. Different as in waffles and not my faithful love of pancakes.

Yes, I’m a true creature of habit. Once I find something I like, I won’t order anything else off the menu. Because I’m eating of course what I like. 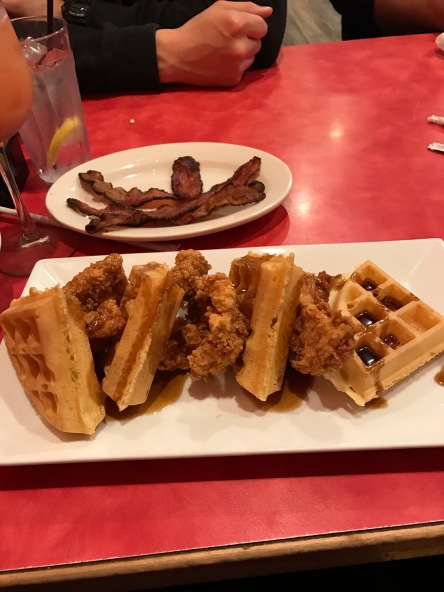 The waffles came with a caramel bourbon sauce. Which I immediately asked for an extra cup of once I tasted it.

It was so good I wanted to lick the plate clean but I had already ate too much. Now here’s the real shock. My meal came with the chicken and waffles and a plate of cubed hash browns and it was only 10.99. Can you believe it? That’s a lot of food. Because I’m greedy, I also ordered the thick cut peppered bacon and a strawberry mimosa with a splash of champagne. 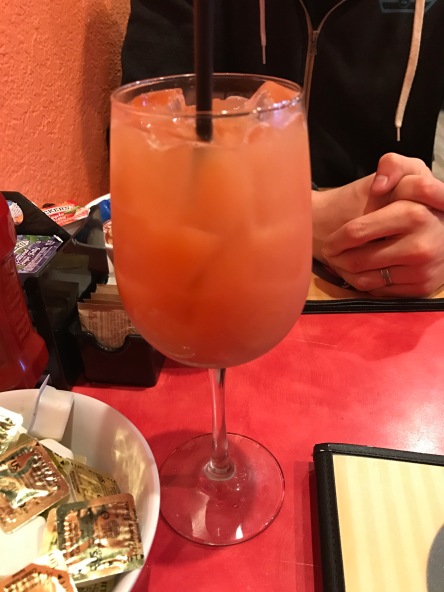 They could have dressed the glass better but no worries…I killed it too!

Needless to say, I ate all the bacon, chicken, waffles, and potatoes. Driving him, my eyes were so heavy that I thought I was going to fall asleep. 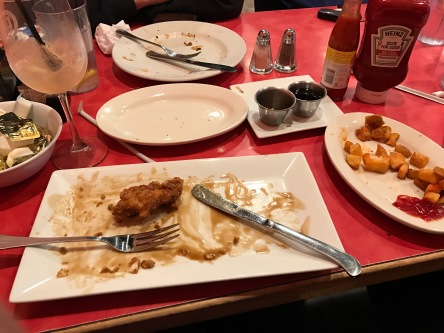 I’m going back again before the weekend is over.

P.S. I took my son, the picky eater and they actually had boiled eggs, sausage, and fresh fruit that was satisfactory to his likes. He was a happy camper when he left too. The waitress was very impressed that he knew exactly what he wanted to eat.