Vegan Chick Pea Gyros. OMG!!! Amazing. Very delicious dish. I had to rearrange the flavor profile to add a little of me but shit I could eat these all day. Too bad I just come back from the dentist and my mouth was still numb. I had a hard time keeping my food in my damn mouth. (If One of my kids snuck a pic, someone would have thought I needed a damn baby bib) But the shit was so good that I didn’t give a damn that I kept biting the fuck out my tongue.

Roasted chick peas were the meat substitute. Who the fuck thought of this idea? Shit was on fire with spice but it was off the fucking chain.

Today’s side dish brought to you by the letter C as in cauliflower bitches. Okay. I’m being silly. I hate cauliflower or do I? I made barbecue cauliflower. These mofo’s were great. Changed my mind about fucking cauliflower. Shit was delish! Any who! I posted some pictures. If you want the recipe then you gotta post a comment.

On a side note, cause I just HAD to share…I got rejected from a vegan group on FB. Can you believe that shit? They had a questionnaire. Guess my ass was a little to real when I said…”I love fucking meat…it just doesn’t love me.”

Fuck, I’m thinking about some bacon right now. PIG bacon! Not that fake shit! I digress! Here’s the pic. 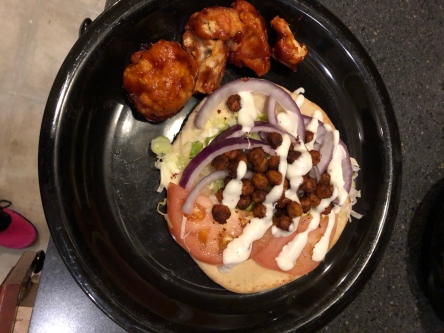